Release of the new US election campaign simulation game. Are you more like Trump or Clinton?

You can now buy a version of the game which is compatible with the Steam platform directly from our website.

Just click on the Steam logo on the product purchase page.

Masters Of The World is now available in CHINESE language!
This version includes the latest 2014 geopolitical datas and scenarios.
On sale on this page on our site: selling page .

The JAPANESE version of the 2014 EDITION add-on is now available!
On sale on this page on our site: selling page .

The 2014 EDITION and MODDING TOOL add-ons are now available for MAC!
On sale on this page on our site: selling page .

The patch 5.32 is on-line ! Click here to get more details about the patch.

The patch 5.31 is on-line ! Click here to get more details about the patch.

The 2014 Edition add-on, which includes the God'n Spy mode, is available!
Click here

The Japanese version of Masters of the World is now on sale! Go to buy page.
The November newsletter is available. Click here to receive it.

Due to several players still wishing to enter the competition after its original closing date, the deadline will be extended to November 17, 2013!
Winners will be announced in the next newsletter.

PRIZES FOR THE BEST MASTERS OF THE WORLDS MODS ! 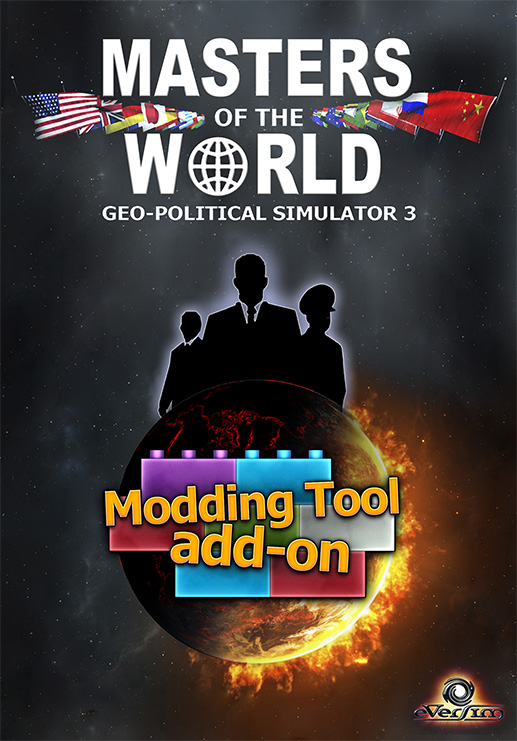 Between August 30th and October 15th 2013,
create a scenario with the Rulers of Nations Modding Tool,
and you could be one of the Eversim prizewinners of fall 2013.

Best scenario - Prize : $300
This award will be for the best-developed and most interesting scenario, with lots of character involvement, plot twists and a cohesive story.

Most original mod – Prize : $100
This award will be for the mod showing the most original background and high quality formatting.

Most popular mod - Prize : $100
This is the Audience Award - votes from the internet users will determine the winner.

All you need to do to enter is use the Modding Tool’s built-in sharing option!

Release of the “Modding Tool” add-on to Masters of the World:
Create your own geopolitical scenarios and share them with other players!

The multiplayer network mode is available!
It is downloaded with an automatic free update 5,14 when running the game.
Click here to get more details about the patch 5.14.

Masters of the World,
The new version of the best geopolitical simulator,
with even more depth and detail!
The PC version is available!
Buying page.

The Mac version is planned for the end of May.
You can watch the trailer here.
If you already own Rulers of Nations, Geopolitical Simulator 2, you can get an additional 15% discount.

Masters of the World, Geopolitical Simulator 3, was designed according to the wishes expressed by the players themselves, thanks to a survey launched in late 2011, whose results you can review by clicking on the following link :here.
We would like to thank our entire community: all the sites that are specifically dedicated to the game around the globe, as well as all the users who send us their encouragement on a daily basis and provide us with information about their countries, enabling us to have data that is perfectly up-to-date.

Masters of the World, Geopolitical Simulator 3, was also designed for the education sector, thereby including, among others: explanatory notes, aids for playing game, the possibility to have a class play the game in world simulation mode, or new contextual scenarios representing current events. Significant discounts are available for purchasing the versions for the education sector, depending on the desired number of versions.

For a full explanation, visit the following page: Education sector.